Back porch early and Psalm 71.

The Psalmist who has seen many troubles and calamities proclaims God’s wondrous deeds, and mighty deeds, and deeds of salvation all day and to the next generation.  I am compelled to join in.

But first I must learn.

Seven tiny wonderballs of writhing gray-black fur under the heavy cathedral arch of hydrangea limbs seem like the farthest thing from a mighty deed.  But the scripture and the kittens came to me on the same morning, so for him who has ears to hear, let him hear. 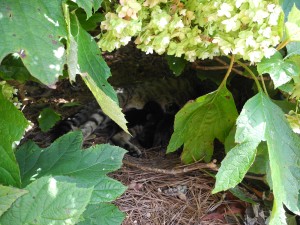 Andrew and I knew the kittens were coming.  I won’t describe the tell-tale signs, but even non-animal people like us could put two and two together.  We ran around like first time parents-to-be:  On the porch or off the porch?  In a box or not?  Could she make it up the ladder to the place she had the last litter indecently recently?

Finally the event started and I saw stars and had to go inside and drink some lemon water.

My heart went out to her as to any mother in birth pangs, but Andrew said that the only animal in the animal world that feels pain in childbirth is the human.  He read it in an article and it carried some theological sense too.  It certainly seemed fair.  But I still couldn’t really believe it.  The marquise-shaped pupils of Midge’s wild eyes were dilated wide, and she paced.  Maybe she felt no technical pain, but make no mistake, she was affected by Adam and Eve’s fall.  This was no average day, no walk in the park, and she knew it.

And the next six weeks won’t be average days either.  In addition to being all and only a milk jug to the seven in the panting summer heat – we paused to wonder if she has enough “outlets” for seven milk drinkers – she also has three other offspring four months old who think they get to live here permanently too.

And yes, I feel terrible that she must have been back in the family way before those three were even a month old.  But, I ask, what could I have done?  The orange hooligan Tom that I am constantly scatting off looks like a bad boy, but couldn’t have contributed any DNA to this monochrome group.  This litter’s sire is straight out of Brontё – dark, brooding, and gone by morning. 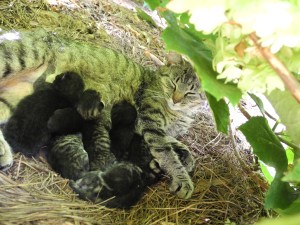 So the seven join their muted squeak-toy solos to the bird chorus of the morning and I learn.

I am as blind and helpless as they are. In a shady Alabama pine straw wallow revival  begins low and on the ground.

When I am low and on the ground I search out His mighty deeds and join the Psalmist’s song.  And so against reason and emotion, I choose to be glad for the things that keep me low because those are the things that force me to the rock of refuge where my lips can shout for joy.