That is what we said to each other as we coasted home to the 9 Oaks Inn after day one. And it was that gratifying pain of hard work. It was also

Glorious, glorious, glorious. Exhilarating. To spend an entire day outside, cold, but not too cold, breathing the air of the woods, sunburned even! Well, that’s a privilege.

I’ll mention here the most mundane and almost irrelevant, but still notable, detail. My hat is off to you northern ladies. I never realized how challenging the beauty regimen is up here. I felt myself turn into a chapped, wind-whipped husk the minute I crossed the state line. My hands crusted, my hair wilted to a fine, static cape, my eyes watered. In short, the elements are against us and it’s a war. But, I told you this observation was irrelevant, so I’ll move on.

We discovered the Cross Country Ski Headquarters in Roscommon, Michigan on a general Google search and what a perfect find. Thank you, Google.  Bob and Lynn and their staff are excellent. They outfitted us for skis and provided Fran, and her hour of instruction. And then, we were off on the Wild Turkey trail.

The sound of the skis on the snow is the scrape of a sword coming from its scabbard. Very cold and metallic and pleasant.  Our skis are called ‘spiders’ which has something to do with snow conditions.  And tonight we have the skis in our car which is so legit.

For anyone wondering how to deal with flabby arms, this is your sport. This was a tricep workout extraordinaire. Tricep, every cep.

Our friend who told us that the front line muscle group that will lead the charge and suffer the most casualty was the inner thigh was almost right. Yes, inner thigh, but really that tendon (or ligament) right at the bend there that connects the leg to the trunk. Any attempt to turn or stop the ski relies entirely on that tendon, that one overwhelmed, overstretched piece of cartilage screeching like a cat in the night.

But louder than that cartilage’s screeches was the voice from core of my being that said, ‘If you fall down again, we are not getting you up. So do whatever you have to do to stay up.’ And I was all over that, except that many factors take you down, including the burst of pride that comes from achieving a little glide, or feeling on top of things enough to admire the deer hoof prints. Down you go.

Dinner at Spike’s Keg with the incomparable waitress Donalyn and the feisty guys at the pool table, then back to the 9 Oaks to rally our forces for day two and a trail along the Au Sable River. *Update: it is snowing and 20 degrees. Brrrrr, y’all. 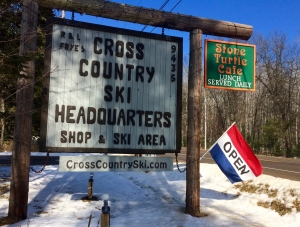 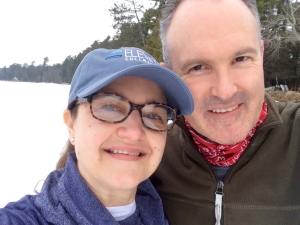